These Lemon Fat Bombs are great for a great way to curb your appetite in between meals. They also help your digestive system and enhance mental clarity thanks to the hearty dose of healthy fats + protein. Plus, my lemon meltaways look gorgeous on a party platter!

I love watching YouTube videos where the babies have their first taste of lemon. It’s so funny to watch their faces! They either love it or hate it. As for me— I LOVE lemon! When I was pregnant with my son, I literally ate lemons like apples. I eventually had to stop because my dentist said I was ruining my tooth enamel.

What are Lemon Fat Bombs?

Fat often gets a bad rap. Honestly, your body needs fat to thrive. Yet not all fat is the same. My lemon meltaways use fat from plants (cashews and coconuts) as well as a fresh lemon juice, a bit of maple syrup and a pinch of sea salt for an easy peasy snack. Eat a few of these for your next afternoon snack and feel your brain wake up.

No need for that afternoon caffeine fix, grab one of these instead!

Purposely eating fat can sound scary. Yet our bodies NEED fat to function at our best. So if you’re trying to lose weight and you cut out all fat, you aren’t doing your body any good! Including healthy, whole food fats like the cashews and coconut oil in these lemon fat bombs is a great way to get good fat back into your diet.

Can you eat fat bombs for breakfast?

You can include these in your breakfast, especially if you’re only getting protein and carbs in but no fat. Starting the day off balanced is the best way to go.

How long do fat bombs last?

Store my lemon meltaways in the freezer for several months. Once they set the first time, you can transfer them to a freezer-safe container and grab whenever you want to!

Is your mouth watering yet from this lemon fat bomb recipe? Then I have a feeling you’ll LOVE my new recipe book. Don’t miss out on the healthy and taste recipes in Simple Green Meals.

Now I gotta go run to the kitchen and grab a snack for myself! I love nourishing my body with healthy foods that taste amazing. Which one of these snacks sound like a winner to you? And don’t forget to rate + review my lemon fat bombs; they are truly my go-to! 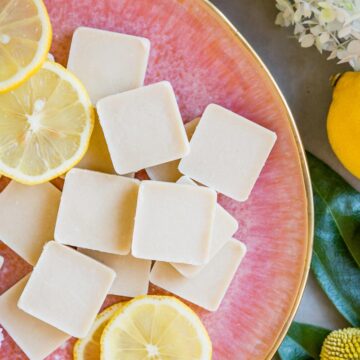 These lemon fat bombs, or meltaways, make a great quick afternoon snack. I should warn you—you really have to like lemons to enjoy these tart treats.

Plant Based Recipes to Fuel Your Life

This recipe was originally created for my cookbook, Simple Green Meals. If you are trying to eat more plants then this is the cookbook for you! It’s full of easy recipes just like the lemon fat bombs with a variety of flavors to fit your preference. I’ve got you covered for breakfast, lunch, dinner, snacks and more.

One of the signposts that gives me confidence to say that 2019 is the year the world gets to #rethinkcider is that there is so much bloody stuff going on. The fact that I have to extend your reading misery by doing this article over two parts is testament to the sheer number of cider events taking place this year. But, of course, dear readers, as we know, quantity is not necessarily commensurate with quality. Well, luckily for us ciderphiles, it just so happens that we have a stellar line up of events.

First up, exceedingly imminently, and in the first flush of is the joy that is Blossomtime at the Big Apple. In my book, Ciderology (still available – please buy before it goes in the barga bin of shame), I rather described in the Big Apple as “my favorite thing in the world. Better than my birthday. Better than sexagesimal trigonometry. It’s pretty bloody good.” Not that I’ve ever been prone to hyperbole, eh?!

As well as the manifold talks, tastes, walks and general celebration of all things apple-y and orchard-y in The Shire, it is also the first opportunity to see who has made some cracking cider and perry last year. I, alongside my brother Alex, made 50 litres of Dymock perry last year, which will be entered, although our natural enthusiasm is somewhat tempered by the slightly disconcerting “sausage like” characters emanating from the liquid…..

But the judging doesn’t stop here, oh no. The Museum of Cider in Hereford will once again test the taste buds of a select band of judges before the British Cider Championships and International Cider Competition at the Royal Bath and West Show sweep into town (well, Shepton Mallet) at the end of May.

But, in many, ways all of these events are a precursor to the most significant event this summer – The Cider Salon. After the overwhelming success of last year’s first instalment, organisers Martin Berkeley and Tom Oliver (ably unassisted by yours truly) are back once again to champion the finest cider and perry in the land, and a little further afield, too. Put it in your diary, folks: SATURDAY 8th JUNE – BRISTOL. But actually, get yourselves down on the Friday afternoon so you can participate in a spectacular Cider Dinner at Yurt Lush before enjoying a number of talks and tastes on Saturday morning/lunchtime prior to the main event itself taking place at The Trinity center from 3: 30.

Aaaaaaand finally….. I’ve teamed up with some cider legends to create something, that we think, will (quite literally) change the narrative around cider. I truly believe that we have entered a period whereby there is an openness and willingness of curious drinkers to try something new. And cider absolutely is one of those drinks. It’s just that the drinks trade and the drinkers themselves don’t know this yet. But now there is a great opportunity for cider to have the awareness and respect it deserves. There just needs to be a bit of guidance on what this cider lark is all about.

So….say hello to Full Juice. A free publication available into the trade, the aim is to do for cider what Original Gravity has done for beer. And to make this happen, the Full Juice crew comprises of myself alongside award winning drinks writer Pete Brown; award-winning drinks writer, Imbibe Live cider ambassador and Little Pomona co-founder, Susanna Forbes; and last, but not least award-winning writer, photographer and general cider geezer, Bill Bradshaw. Did I mention that they were award winning writers? Not a bad little line up, eh?

Episode One gets out into the world at the end of May with celebratory events taking place at The Cider Salon in Bristol (8th June) and with London and Manchester TBC very soon. There’s a website on the way, but for now keep abreast via Twitter, Insta and Facebook.

Full Insight. Full Passion. Full juice. Told you this is the year that folk start to #rethinkcider. Spread the word.